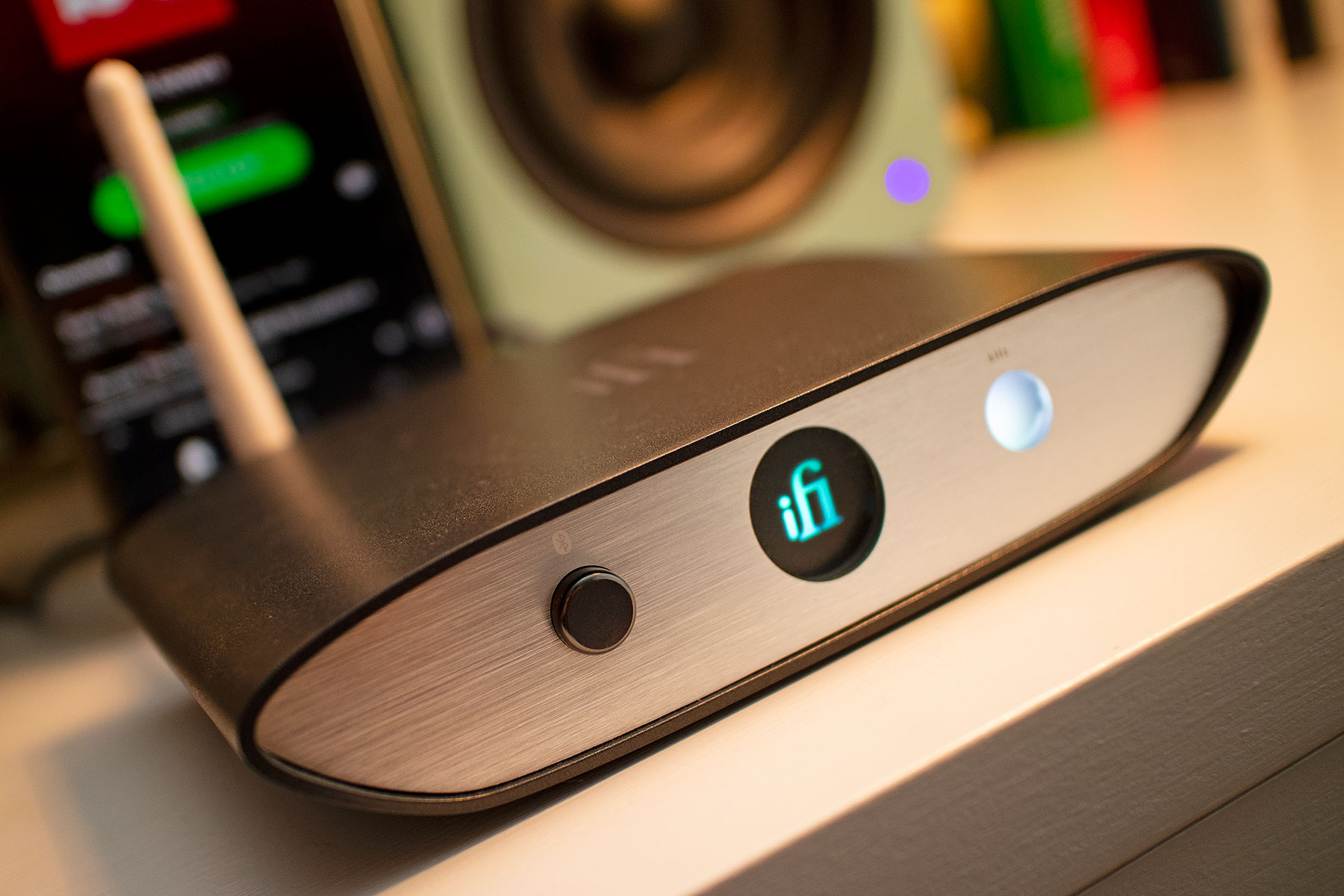 iFi was born in 2012 with one goal in mind: to produce 'ultra-fidelity' audio products that push the sonic envelope whilst still priced within the mainstream.

iFi audio is under our parent company, AMR, Abbingdon Music Research, which designs and produces top-end luxurious audio products. AMR saw in 2010 that customer demand for wireless and portable headphones was expanding as the whole audio dynamic was changing. Thus, iFi was launched.

iFi offers small but prodigious personal audio products thanks to the superior knowledge of AMR’s technology. Today, we are proud of our British (and international) roots. We continue to design and produce over 35 different products. We are headquartered in Southport, UK with distribution including retailers such as B&H and etailz with production overseas.

We source parts from around the world from manufacturers including AMOS (UK), GE Valves (USA), WIMA (Germany) and TDK (Japan).

For many audio manufacturers, Bluetooth reception represents a mere convenience, incorporated in the cheapest way possible to simply ‘tick a box’. But the manner in which Bluetooth is implemented, the quality of the audio processing and the circuitry that surrounds it, has a big impact on performance. Not all Bluetooth sounds the same, and iFi engineers its products to obtain the best sound from every source – Bluetooth reception included.

With the ZEN Blue, this starts with a chip from Qualcomm’s highly specified QCC5100 series to process the incoming data. All the latest Bluetooth audio formats are supported, including Qualcomm’s aptX and aptX HD; LDAC (available in future update) and HWA – hi-res Bluetooth codecs created by Sony and Huawei respectively; AAC, the favoured format of Apple iOS devices; and SBC, the standard Bluetooth codec. This means every possible source device is covered, at the highest resolution its Bluetooth specification allows.

The ZEN Blue remembers up to seven paired Bluetooth source devices, making it easy to switch from one device to another, with impressive range thanks to the latest Bluetooth 5 specification. The DAC stage is capable of processing hi-res PCM data up to 24-bit/192kHz – the maximum sampling resolution/frequency currently available over Bluetooth is 24-bit/96kHz (via LDAC and HWA) and 24-bit/48kHz (via aptX HD).

The ZEN Blue has separate digital and analogue stages; to feed the analogue stage, the processed digital signal is routed from the QCC5100 to a specialised DAC chip from ESS Technology’s Sabre family to convert the signal from digital to analogue.  Other high-quality circuit components include C0G capacitors from TDK and a precision low-noise power supply IC from Texas Instruments. It all adds up to a super-affordable Bluetooth DAC with a sound that punches well above its weight.

The ZEN Blue can be used to add high-quality Bluetooth reception to any audio system via analogue or digital cable connections. On the analogue side, RCA stereo outputs allow connection to amplifiers, active speakers and the like, while a 4.4mm output enables balanced signal transfer to amps/speakers with a balanced input – either a 4.4mm input, or XLR inputs via a 4.4mm to XLR cable.  For digital connections, optical and coaxial outputs are provided – these allow connection to anything with a built-in DAC and corresponding digital input, such as an AV amp or an external hi-fi DAC.

This is the first iFi product to benefit from the input of legendary John Curl, who has teamed up with iFi’s electronics design team, led by Technical Director Thorsten Loesch, to ensure the circuit design of every product is fully optimised.  The ZEN Blue’s analogue output stage is a balanced design –highly unusual in a DAC anywhere close to its cost. It incorporates a range of high-quality circuit components, carefully selected for their performance in an audio context, including professional-grade balanced line drivers, C0G capacitors from TDK and a precision low-noise power supply IC from Texas Instruments. 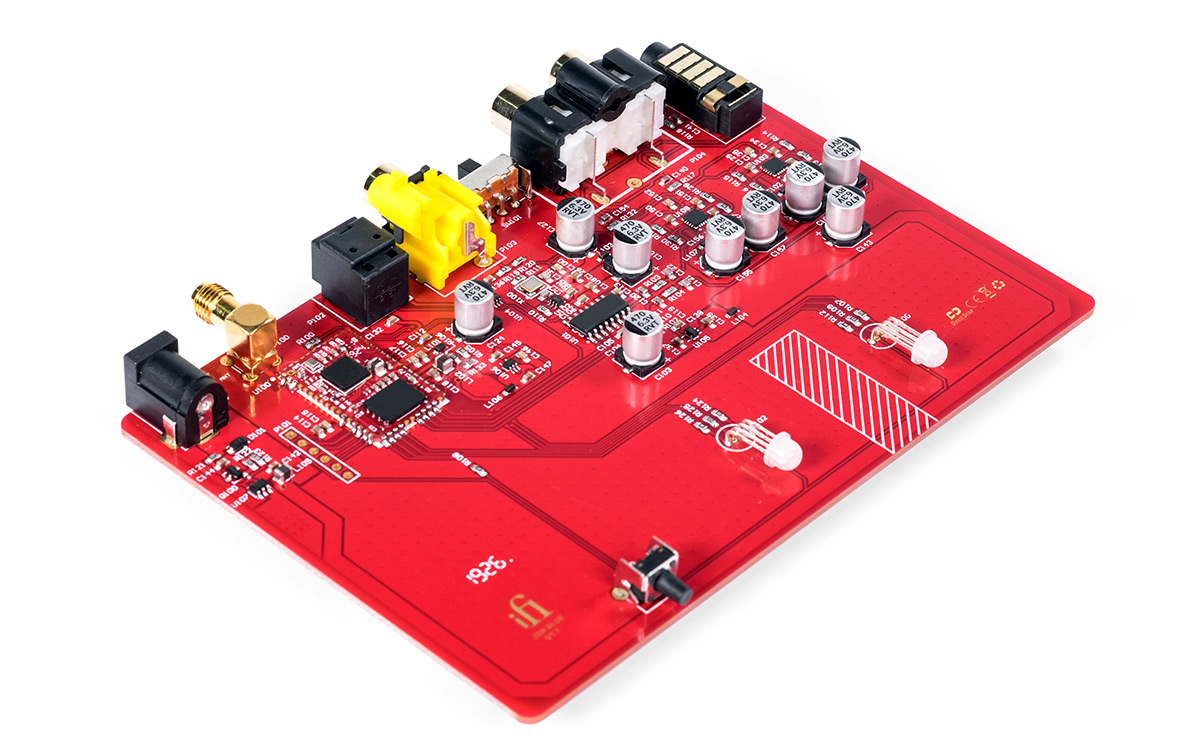 The Qualcomm QCC5100 offers a system-on-a-chip Bluetooth solution, with all functions covered including D-to-A conversion. Many manufacturers would simply rely on this chip to deliver DAC functionality, but this is not the iFi way. The ZEN Blue has separate digital and analogue stages; to feed the analogue stage, the processed digital signal is routed from the QCC5100 to a specialised DAC chip from ESS Technology’s Sabre family to convert the signal from digital to analogue.

One of the key advantages of the ESS Sabre DAC chip is its Hyperstream architecture with integrated Time Domain Jitter Eliminator, which helps to deliver vanishingly low distortion. iFi has found that this allies perfectly with the Qualcomm chip, in conjunction with iFi’s own GMT femto-precision clocking system, to deliver Bluetooth audio that sounds far better than the norm.

AAC is one of the most commonly supported Bluetooth codecs in the wireless headphone and speaker markets. It’s also the default audio compression codec used by Apple’s iTunes and YouTube, and is supported across both iPhone and Android smartphones.

Top-notch operational amplifier. This is iFi/AMR quality at its best. The 'OV' ICs are streets ahead of mainstream commercial chips and use HCOFC copper lead-frames and 4N Gold bond-wire.  Most commercial amplifiers use inexpensive aluminium bond-wire and low- grade/low-cost copper in lead frames.